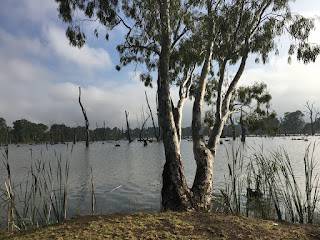 January 2016 - Reflecting on failure over the Australia day long weekend, from our campsite at Cohuna

You might think this is a strange thing to blog on, my failures. So I will begin with attempting to explain why this is important to me.

I was inspired by Engineers Without Borders (EWB) Canada, since 2008 they have published a failure report. Asking just such a question in interviews: "What people perceive their biggest weakness to be?" - is one of my favourite questions. The diversity and depth with which many people have considered this in relation to the position they have applied for is insightful and a reflection on how humble they are, what would your answer be?

For me the process of writing this piece centres on the learning which comes with practicing the admission of my own flaws through tangible examples (not necessarily avoiding them reoccurring, as sometimes it takes me more than one shot before the lesson sinks in!) and allowing others to learn from them. Not in the hope that you don't have to experience them (this too is unrealistic) but in the hope that if they happen to you can recover more quickly.

I have often done this in private, diaries and reflection pieces on projects, roles or situations. But public reflection is new, so hear goes.

1. I am not a lone wolf and am poor at relying on just myself to motivate, inspire and generate action

And yet this is exactly what I tried to do for 8 months after leaving Boeing. I thought I would 'go it alone', consulting to schools through Cleverist on how to relate Science, Tech, Engineering and Maths (STEM) concepts to the world around us. Something I remain passionate about.

I start with this as it is an example that, on reflection, I knew about myself but failed to translate. In the past I rarely studied alone seeking the support of my friends, prefer professional projects which are complex in relying on multiple stakeholders and prefer travelling with friends and family.

This is due, in part, to the element of my personality which enjoys and indeed needs to think big, to blue sky solutions and in the words of Eric Weinstein explore options D, E and F as if they were real. Without people to explore and refine this thinking, and balanced by people who compliment my bias to action by translating these ideas into tangible but aligned outcomes, I have trouble articulating my thoughts and down selecting the most appropriate path(s). This results in wasted effort and resources (yes $ too) with limited impact.

Before I expend effort & particularly money I will ensure I take the time and surround myself with the people who can support the filtering and translation that maximises the impact of my actions.


2. I tried to create yet another offering for teachers. Despite knowing of the overwhelming flood of STEM related offerings available, and spending significant time documenting why engagement remains a primary challenge

I joined the throng for 8 months before working out I was better off using my skills to increase the impact of the outstanding existing options. My efficiency and first hand corporate experience coupled with months of first hand classroom observation meant I had a unique set of knowledge. Don't beat em', join em' it is more efficient and effective than attempting to compete!

This realisation led initially to my contract and later permanent position on the EWB Australia team.

In future I will seek opportunities, which insight passion and with which my values align, to maximise the impact of the change I can create.

3. I isolated those I sought to create change with by not articulating the journey at the beginning

I fear the articulation of the journey when undertaking organisational change. At the start of the process I fear articulating the steps will unnecessarily lock the process and hence myself into actions which may not be appropriate as the change progresses. This would have been apparent to the EWB staff as I led them through the introduction of a new organisational structure. I left people feeling uncertain and even fearful through a lack of articulating the how, why and when of the change. For me this personal fear comes from being subjected to and observing actions demanded simply because they had been articulated at the beginning of a change, despite being inappropriate and in some cases damaging.

"a disciplined process of inquiry conducted by and for those taking the action. The primary reason for engaging in action research is to assist the “actor” in improving and/or refining his or her actions."

Action research allows adjustment of subsequent action based on the observed measurable outcomes of the previous action. An approach to change somewhat similar to the process of agile development as is commonly used during software design. Action Research does not however excuse explaining the overall direction and steps up front and this is my failure. It instead encourages open disclosure that the series of steps may change based on need but the direction and end goal remain, thus providing the reassurance people need.

In future I will spend sufficient time and energy articulating the journey right up front!

4. I once again allowed my paid work to impact my life beyond work

This is I am pleased to say something I have gotten better at; to quote my husband it is '2000% better than when you were at Boeing'. My evidence for how far I have come is a health check conducted during my last 12 months at Boeing. My blood work, muscle strength and cardiovascular fitness were all borderline ok for my age. At the time I remember thinking this was an appropriate sacrifice for the rewards I was experiencing professionally. In retrospect I recognise how delusional this sounds.

To illustrate the impact this had, I have a strong memory of a weekend away with friends at Port Arlington in 2013. Not only did I take my laptop but I skipped meals to sit on a nature-strip, on top of a hill, at least 700 meters from the house, to get enough phone reception to talk to work. Part of leaving was as a result of my inability to rebalance this expectation I had both places on myself and that others placed on me.

This year I had some minor slips where I worked too late, didn't take time owed to me, brought work home (& on weekend trips) and chose to work over spending time with friends or family. Although minor in comparison I recognise these incidents as unacceptable to me. I will continue to strive to demonstrate the balance I believe is key to maximising productivity.

5. I did not make my personal commitment to EWB Australia explicit and in conversation used 'you' when I meant 'we'

As a newbie to the EWB Australia staff and particularly to the leadership team I was not explicit enough in making my personal commitment clear. I was new to the sector, worked for an organisation which has previously failed to meet EWB's ethical partnership test and am outspoken in questioning the way things have always been. An outsider.

I used 'you' not 'we' when referring to change within the organisation. Thankfully a thoughtful member of staff mentioned it to me and though this awareness I do not believe I have made this mistake again.

I can only explain this by saying that even though I am custodian of the CEO role I continue to struggle with my own validity for being in the position. I am regularly humbled and surprised by those who have had career long influence in the social sectors and they gain as much from me as I have from them.

In future work I will ensure that it is explicit which direction I am working towards by articulating my personal alignment with a team or mission.  I take comfort from knowing within myself, that I will not engage if I do not fundamentally believe in the goals of an organisation.
_________________

I hope you can take some learning from my learnings. Please share your thoughts and reflections with me as I certainly have more to learn from you.

I have encouraged and enabled EWB Australia to also produce a failure report, our first attempt can be found here.
http://www.ewb.org.au/ourimpact/failure

Posted by Unknown No comments:

Tim Ferriss - On setting goals:
'What would it look like if it was easy?'

What I'm watching and listening too

Derek Sivers - "How to start a movement"